ParagonRx is a very good B2B case study that allows you to see how SAMC approaches a project and implements a new branding, marketing and business development process.

ParagonRx was a client from 2008-2009, during a period in which it was re-positioning itself in its market. Founded in 2001, it specialized in the application of ethnographic research to pharmaceutical industry problems. In 2007 however, the federal government passed new legislation empowering the FDA to mitigate concerns over drug safety and protect the public health, called REMS (Risk Evaluation and Mitigation Strategies). ParagonRx had developed a proprietary process, RxFMEA, that could identify areas where risks were going to develop, and its team of experts was ready to work with pharmaceutical companies to help them respond to the new FDA requirements.

How to Create Demand. The problem was creating clients. ParagonRx engaged SAMC to help them develop a brand story that would position them as leaders in the REMS world. In many ways, ParagonRx was well-recognized but still considered a small start-up company in this new emerging arena.

SAMC’s Approach. ParagonRx’s management team was already familiar with ethnographic research and had performed a number of major ethnographic projects themselves for their clients in the pharmaceutical industry. SAMC’s task was to use our anthropological techniques to better understand the new, emerging target audience. This was an exciting new market space that was opening. ParagonRx had to create demand among nonusers; our task was to reposition the new ParagonRx brand to build a robust reputation quickly and effectively.

Observational Research at the Client. We began by spending a “day in the life of the client”—similar to our “day in the life of a customer.” We spent many days on-site understanding what they did, how they did it, the company’s personality, its business approach and their different stories, both personal and professional.

Ethnographic Research in the Field. Then SAMC visited ParagonRx’s clients and potential clients. Our culture probes helped us listen to people in the target audience talk about REMS, ParagonRx, their unmet needs, the “foggy” perception of this new area and how to respond to the FDA. These were large pharmaceutical and bio-tech companies. They certainly had no shortage of talent to help them respond to new FDA requirements. What could ParagonRx offer that would provide a focused, differentiated and compelling brand?

Findings. What we found was that the industry was trying to determine what REMS and the FDA were really all about. The law was vague. The FDA was unclear. The crucial niche was for someone to teach them what REMS was, how best to respond to an REMS requirement, and then how to avoid risks once REMS was completed.

Positioning. To begin, SAMC developed positioning to cast ParagonRx as “the thought leaders” in the field of REMS. There was clearly a void. No one had captured the space of “go-to” leaders in defining and managing REMS, nor was there a company who had the inside understanding of what the FDA was really looking for and how to spare a pharmaceutical or biotech company from future problems. Sales and Marketing among the potential clients simply wanted to go to market with minimum risks, and REMS was a road block.

Marketing Strategy. Paradoxically, ParagonRx had just completed publication of its second book but had done little to market it. Their marketing was essentially confined to word-of-mouth among those who knew them.

SAMC’s Strategy. Our approach was to leverage ParagonRx’s tool kit—leverage their books, develop speaking engagements, complete their website, and launch a blog and monthly series of webinars. These blogs and webinars became core components of their “reputation development”; several pharmaceutical companies had 30 people watching ParagonRx’s monthly webinars to learn what REMS was all about, how it was developing, what they should do to modify their marketing, branding, and product development to anticipate FDA requirements, and how to respond appropriately.

Results. We knew we were making headway when a new ParagonRx customer was asked how they had found the company. The answer: “I read your blogs all the time and when my CEO wanted me to find a company to help us, I gave him your blog to read.” The CEO of ParagonRx continues the webinars to this day and gets a steady stream of new business from them. Just as important, ParagonRx has built its reputation among clients and the FDA by being the “thought leaders” in this industry. As a result, ParagonRx is recruited to speak nationally and internationally on these topics as the fields evolve.

Follow-up. When we did follow up culture probes, interviewees spoke about how ParagonRx really “got it” and were well-positioned to help them achieve their goals the most appropriately and successfully.

We invite you to visit ParagonRx’s website. Their FoREMS & More webinars every Wednesday continues to drive new business and build their reputation. 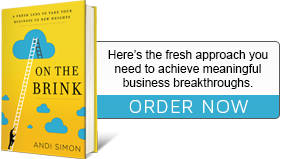 Register Now
Are You Ready To Rethink Your Life?Sign-up for our Exceptional Newsletter!

Share your email and we will send you a monthly newsletter you can use every month with tips and stories about women who are rethinking their lives.

You can find out more about which cookies we are using or switch them off in settings.

This website uses cookies so that we can provide you with the best user experience possible. Cookie information is stored in your browser and performs functions such as recognising you when you return to our website and helping our team to understand which sections of the website you find most interesting and useful.

Strictly Necessary Cookie should be enabled at all times so that we can save your preferences for cookie settings.

If you disable this cookie, we will not be able to save your preferences. This means that every time you visit this website you will need to enable or disable cookies again.

This website uses Google Analytics to collect anonymous information such as the number of visitors to the site, and the most popular pages.